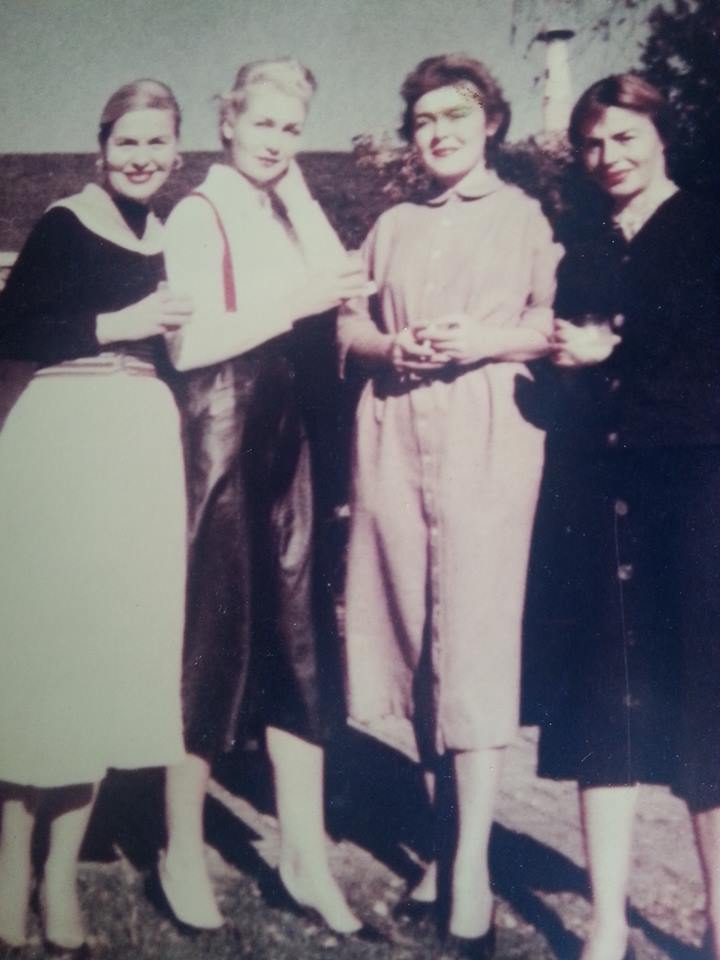 Someday soon they will find their way into a novel of their own, someday soon I will immortalize them with my prose. It’s only right to share the tale of those four sisters: Catherine (my maternal grandmother) Mary, Iphiyenia, and Caroline. A beautiful quartet who immigrated to America from Greece and took their new home by storm, whether via the lightning strike-illuminations of their physical beauty, or the thunderous resonance of both their laughter and their wrath. They were women of grace and strength, unapologetic in regard to their fierce love for their family, culture, and one another; nor their often ornery tempers–though the latter they possessed in varying degrees. They were each artists in their own right, though my yiayia Catherine arguably pursued art to the fullest extent, marrying my papou, Theodore Polos—a painter from the island of Lesvos who earned renown on American shores–and nurturing in their two daughters–my mother and her sister Kathy–an undeniable creative streak.

Caroline, meanwhile, studied the Classics at UC Berkeley and developed a flair for acting, landing the lead role in adaptations of ancient Greek tragedies such as Medea. Off stage, her penchant for the theatrical was ever evident in her ability to weave mesmerizing tales with a trademark cocktail in her graceful hand.

Of the four sisters, I spent the most time, growing up, with my yiayia Catherine and great-thea Caroline, and so I recall them the most vividly. By the time I was six or seven years old, Mary–eldest of the sisters–was in a nursing home (I fondly remember speaking with her on the phone, and receiving many cards in the mail), and Iphie was living back in Greece. Yiayia Catherine was near-constant presence in my childhood given that she lived just a few blocks away, and Caroline was a frequent vistor, as well, armed with candied ginger and starlight mints, and, of course, a witty story.

All four sisters have passed on now, Iphieyenia–the youngest of the four–the last to leave us just a few years ago. In attending Sunday services at the local Greek Orthodox Church, I inevitably run into someone who knew the sisters, and they inevitably speak at length about what amazing matriarchs they were, from their classy dress to the integrity with which they carried themselves. They are still well, and widely, loved to say the least.

Of course, no one knew them, like us–the family–knew them, and for all their grace they were certainly no strangers to some wild fights. For who are we Greeks without our drama? Their epic, drawn-out shouting matches–which my yiayia flippantly dubbed “discussions”–are things of legend, and yet, somehow, they always recovered from them in the end. Above all else, there was always love between them.

The following flash fiction piece is an humorously exaggerated take on the four sisters that I’ve titled “The Four Furies.” Hope you enjoy!

Villagers referred to them as “E Tesseres Erinys,” In English, “The Four Furies.”

A college student studying Greek Mythology, I knew there were traditionally only three furies, but I wasn’t going to argue with the locals. Upon arriving in town after dusk, reeling in the wake of a seventeen-hour journey from California, USA, my eyelids bent on meeting each other as if compelled via magnetic pull, I  swore shadows moved with a life of their own.

“Ah, what you see shifting in the dark corners are E Tesseres Eryinys!”

I’m not sure if Argiris tried to scare me with such an explanation, but if so, he succeeded. My university textbooks defined the Three furies as “infernal goddesses,” “deities of vengeance.” To say the least, they were ladies you’d definitely want to avoid. According to Argiris, however, not only did one extra fury exist, she, along with her three sisters, inhabited this very village.

Granted, I didn’t know how much faith to put in anything uttered by Argiris. He was my distant uncle, though we were related, somehow, by marriage, not blood. This was our first time meeting, my first time in Greece, and I could tell by the way he tugged at the corner of his mustache and flashed a crooked smile in between sips of raki as we passed those initial hours at a seaside taverna, that he was one for spinning tales. Still, as time went on, and I continued to witness mysterious shapes shift amid waning twilight, I started to become a believer. More people spoke of the ‘Four Furies.’ At last, one evening, I encountered there truth.

They were indeed sisters, nearly identical in their Mediterranean beauty; dark eyes and skin like the sweet peach tone of sun-smooched nectarines. Though they lived separately, inhabiting four corners of the village, they moved as a quartet, at least in the times I saw them; eight shapely legs marching in unison over ancient cobblestone. They turned heads as they went, though every man knew better than to make. One didn’t whistle at passing queens.

I never spoke to them, though during lazy afternoons, I often occupied at an adjacent taverna table, sipping my iced Freddo while observing them, discreetly as possible, as they sat smoking and cradling cups of traditional Ellinko kafe despite the heat. They never seemed very “furious” to me. I didn’t know there names, but I secretly referred to them passed on what I could defer of their personalities. There was The Worrier, always hovering about her three sisters with lines of concern etched across her forehead, no matter the tranquil scene. There was The Charmer, ever leaned back ever so gracefully, and making her siblings chuckle via some inside joke. There was The Drinker, inevitably requesting a scotch on the rocks upon reaching the bottom of her coffee cup. And finally, there was the Beauty Queen, constantly checking her makeup via an elegant pocket mirror. The four sisters seemed relatively serene to me. So why the volatile nickname? The reason became apparent one afternoon as I strolled among the village homes clustered on a hillside above the harbor. My leisurely walk was jarred by the sound of shrieking voices; the cries of mythic Sirens in reverse, sure to prompt any sailor to reverse course. And I yet I stood mesmerized by the blood-curddling screams and swears, vengeful shouts and vicious threats. In the window of the modest stone home from which the commotion erupted, I saw the silhouettes of those four sisters. Furies indeed.