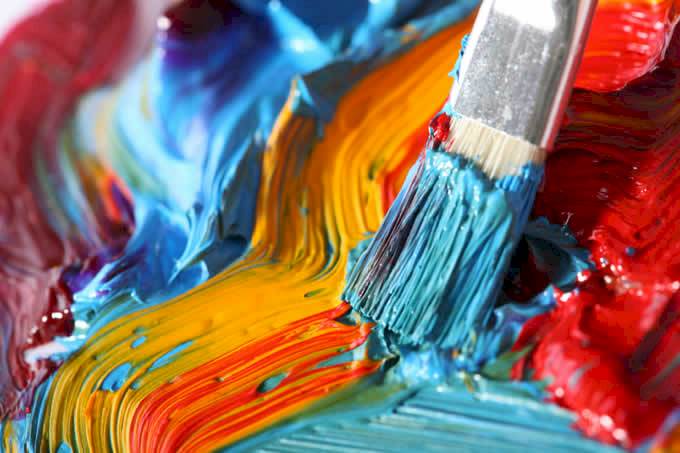 Imagine, if you will, a baby crawling up a mountainous flight of steps, one little knee at a time, slapping the surface of each stair in announcement of his progress. His ascent is inspired not by the promise of toy or treat, but by a desire to view up close the spectrum of colors and shapes beckoning from above.

I was that baby, and the stairs belonged to some famous New York City art museum, the Guggenheim perhaps, to which my mother had taken me during one of our visits to the Big Apple. It seems I was drawn to art (pun intended), so the story goes, since before I could walk, willing to brave even the most arduous climb simply for the sake of a layered canvas. Growing older, and more mobile, I could often be found reaching for a pencil, or crayon, with which I would fill countless sheets of paper; first with scribbles, and then, as my hand grew more confident, superheroes and monsters. My favorite tools of the trade were those gold and silver markers that emit the smelliest fumes via which I would grow intoxicated and then preform “drunken” dinner songs for family. Ah, but that’s another story.

Mom, no doubt, was an big inspiration for this early creative streak. Aside from taking me to see the framed creations of the masters, she provided visions of an artist at work as she spent countless hours at her drawing table laboring at her craft. Art was, and is, integral to our family experience, woven like tapestry into the texture of our everyday life. My mother is a painter and sculptor, and her father, my papou, earned quite a name for himself in the art world despite his feeble beginnings as a Greek immigrant. My dad, who while in America earned a living through his electrician business, has since, in moving back to his native Greece, dedicated himself to his own artistic talents.

A good portion of my childhood was spent in the company of artists, attending gallery openings and exhibitions–many of them my mother’s–wandering among the paintings in search of both inspiration and a makeshift play space. Now, as an adult, attending galleries and museums is still a favor pastime. When Mom is town from Monterey, it’s a joy to trek out to San Francisco and take in an art exhibit. Each painting, every sculpture, tells its own story. I’ve learned that the point of viewing art is not always to glean “meaning” from a piece (“What is this artist trying to say? What does it mean?”, you often hear people remark), but rather to observe how it makes you feel.

I’m grateful that my family has gifted me with a life abundant in art. Just as I was exposed to paintings, so was I entrenched in the world of stories and poems as our home was one full of books. An artist’s life isn’t always easy, but it is ever vivid, consistently rich. When I was growing up, Mom taught art at my elementary school. I often heard classmates–the children of “square” families–say things like, “Art isn’t important becomes it doesn’t make money.” Well, sometimes it does, and it will, if nothing else, expose one to a spectrum of colors beyond the banality of dollar-bill green.

This post is inspired by the recent news that the Senate has passed an act making arts education part of the Common Core curriculum. Now, I believe Common Core is problematic in of itself for a variety of reasons that I won’t expound upon here, but this is a good thing for all. There surely is a place for art in schools. Today, more than ever, we need people who are unafraid to color outside the lines.