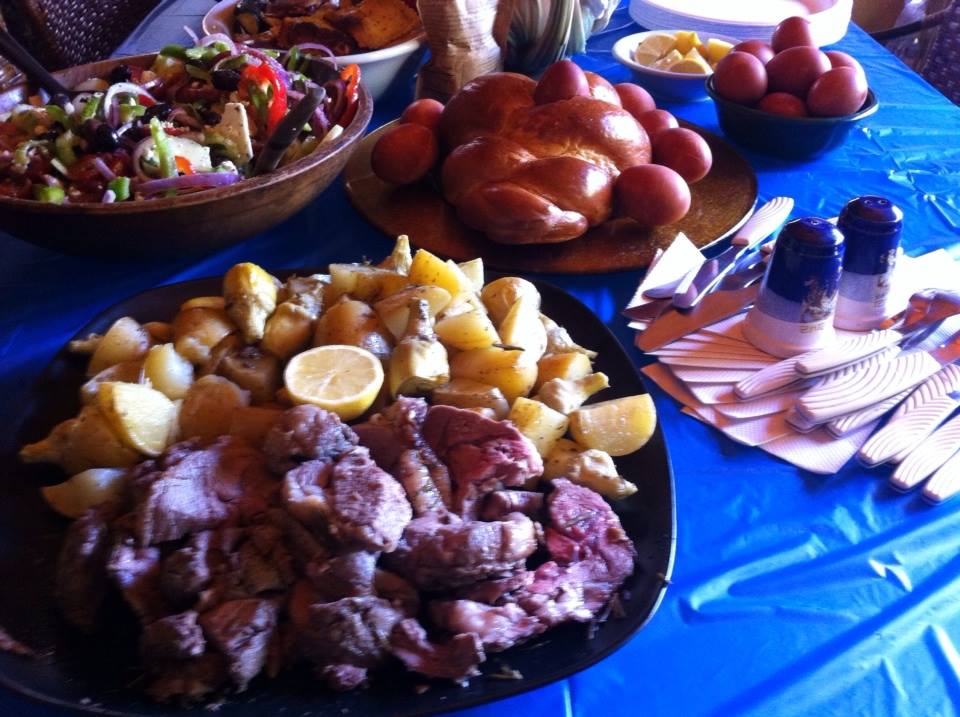 Roast lamb, and other delicacies!

Thinking about this week’s blog made whet my appetite. Even before I’d decided on a topic, I associated the writing of this article with hunger for some reason. Perhaps I skipped lunch, you say? Well, that’s probably part of it, but I suspect more. It seems my subconscious has been telling me that a blog on Greek food is long overdue.

Ah, Greek food. Beloved souvlakia, horiatiki salata, and horta, just to name a few dishes. What pleasure to combine succulent nouns and verbs in bringing those tastes and textures alive as if through some futuristic scratch-and-sniff technology called read-and-taste! If I’ve been hesitant to do so before, it’s probably due to fears of sinking into cliche.

Back in grad school, one of my professors made the observation, after reading an early installment of my forthcoming novel, Wings of Wax, that there was a lot of food in the story. She made the point, which I thought pretty valid, that food is always our initial window into a culture, and that by mentioning food so much I was, in some way, explaining Greek culture to non-Greeks. That may be partly true, but I think that anyone belonging to a rich food culture has a natural desire to share that aspect. In a sense, I’m playing the part of Greek grandpa, coming at you with these sentences as if they are edible, and declaring that oh-so-Greek mantra of Fai! Fai! (Eat! Eat!)

Now, before you start picturing my family and I seated around a big table downing nothing but moussaka, village salad, and baklava every night, I should tell you that my Greek-American mother, an exceptional chef, did most of the cooking. Her dishes definitely had a Greek flair, but she put her own spin on traditional delights.

On holidays like Christmas and Thanksgiving, we ate the classic roast turkey, though it was accompanied by Greek sides like fasolia (green beans stewed in tomato sauce with lots of garlic and oregano), and tiropita. My mother’s recipe for stuffing had been passed down by my maternal grandfather who came from the island of Lesvos, near the coast of Turkey. It utilizes Bulgur wheat, chestnuts, currants and raisins, olives, and Greek brandy among other ingredients. Mom makes a great roast chicken-and-potatoes. Dare I say that no one roasts potatoes like the Greeks; oven-crisp on the outside, fluffy within, and tangy with loads of lemon. The dish is rivaled by the version cooked by my Greek Wonder Woman-of-a-girlfriend Katie, but, hey, don’t tell Mom!

No one does roast lamb like the Greeks, either; but a lot of non-Greeks seem to be on the fence about that one. Rotating on the spit at Easter, or fresh from the oven on a Friday evening, we Greeks like our lamb well-done; crisp and crackling on the outside, dark brown within, and loaded with… you guessed it… garlic and lemon. My Yiayia’s lamb was legendary, though she often worried it was too dry. I’d say she’d been listening to the xeni too long! 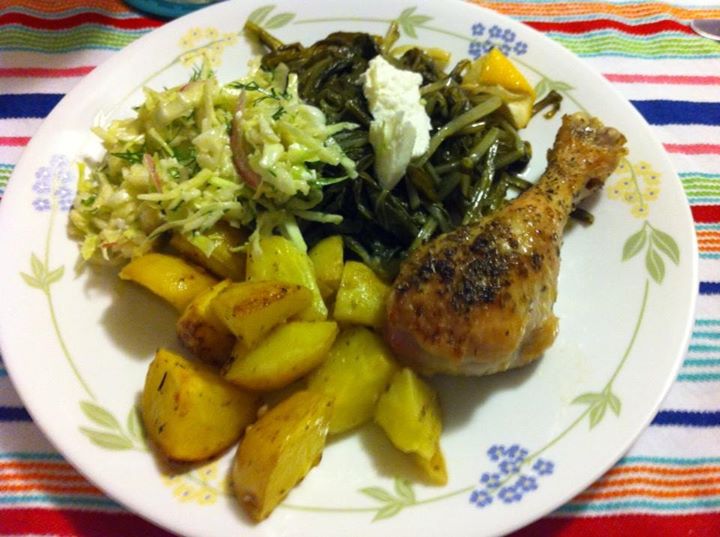 Even my Greek-immigrant Pops got into the kitchen on occasion. Growing up, I remember his traditional fisherman’s stew with lemony fish broth, potatoes, carrots, celery, and other seafood, of course. He liked to surprise American friends by eating the eyeballs. I thought that was gross at the time, but I’ve come to appreciate their delicacy.

So, what do I cook, you ask? I, a descendant of kitchen-savvy ancestors, surely must have my own specialty, right? Tell you the truth, I don’t really cook that well: blame it on having so many relatives who moonlight as chefs. But my relative lack of culinary skills are a subject for another blog.
Now, if you’ve never had Greek food before (and in that case, you’re surely not from the midwest or east coast where Greek restaurants are abundant), you might want to start with souvlakia, simply quality meat grilled on a stick. (Just don’t call it a kabob in front of a Greek!) Lamb souvlakia, chicken souvlakia, or pork souvlakia. All delicious options.

The gyro (yee-row) has almost become as American as the hot dog. Cousin to the souvlaki, you have choice meat cuddled up next to tomato, cucumber, onion, tzatziki sauce, and, occasionally, fried potatoes in warm, fluffy pita. When visiting Greece, fresh off the plane, I can usually take down two at time.

There you have it. Just a small taste of Greek cuisine. Maybe I just explained a portion of Greek culture. But, don’t you agree it was a delicious read?