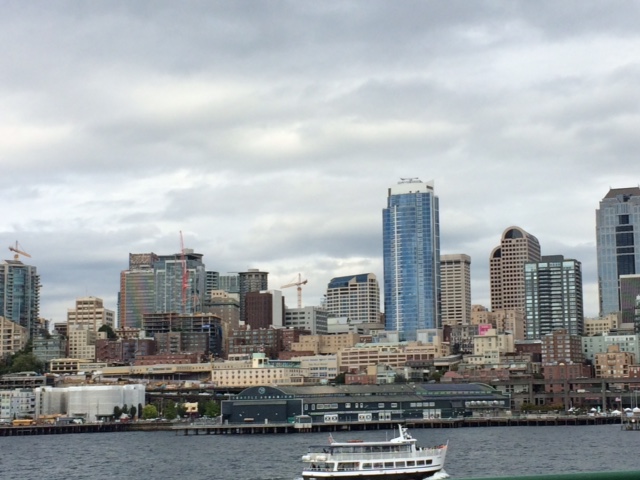 Waterfront view of the Emerald City.

As I write this late Friday afternoon, the last day of July, I reflect on how a week earlier Katie and I were enjoying the sights and sounds of Seattle, Washington in all its emerald splendor. We’d spent the morning braving the crowds amid the hustle-and-bustle of Pike Place Market before enjoying breakfast at Le Panier bakery. I can still conjure those flaky bites of puff pastry dotted with sugar crystals that burst on the tongue like edible gems.

While we people-watched between coffee sips, I thought back to a conversation we had at dinner the previous night, our first in town. Looking across the table at my lovely partner and travel companion, I asked her opinion on the best ways to “live in the moment.” Doing so seems particularly trendy these days with the popularity of Buddhist mediation and yoga. The key to being present, we agreed, is to wholeheartedly focus on your company, your surroundings. Maybe it sounds hokey, or at least a bit too “New Age,” but I think you need to give of yourself entirely to whatever experience you encounter at any given time. That way, treasured moments “can shimmer with a certain permanence,” to quote a line from my novel Wings of Wax.

Later, while we enjoyed a short cruise over to Bainbridge Island, I studied the passing scenery with such intensity that Katie had to inquire as to what I was thinking about. My answer was simply that I was trying to take it all in, savor the moment, commit it to permanent memory, and what memories we made!

It’s hard to judge a city when you’re on vacation, especially a city you’re visiting for the first time. Everything is new and exciting. Food tastes better, sights and sounds resonate deeper. Could I live in Seattle someday? I’m not big on rain, so perhaps not, but I’ll definitely be visiting again. I like all the vivid tones of green, the oh-so-appropriate hints of teal paint adorning many structures, the tinges of ocean on the breeze. Sure, the city’s pace, and proximity to the water remind me of San Francisco, but it’s got it’s own vibe.

Saturday found us in the Wallingford neighborhood where we visited Open Books, an all-poetry bookstore. I’m not as big a poetry connoisseur as is Katie, herself a mighty poet, but it was fun browsing the shelves; a pair of writers on the prowl for inspiration. The day’s literary theme continued as that evening we attended the release party celebrating the novel The Anonymous Source written by my high school buddy, and fellow Booktrope author, AC Fuller. That was definitely a highlight for me, and the chief reason we made the trip up north in the first place. I got the chance to share in the joy of my friend’s accomplishment, and network with other Booktrope authors, many of whom I’d already connected with Online. We spoke about their impressions working with Booktrope. Everyone had largely positive things to say, which left me with a good feeling about my novel’s eventual release this coming winter.

Sunday morning Katie and I were happy to find a small Greek restaurant called Grecian Corner offering gyros and other Hellenic street food. This made up for the disappointment upon realizing, during our Pike Place trek, that while the Athenian Lunch restaurant provided a nice photo op it didn’t have Greek fare on the menu. I hear that Seattle has a rather large Greek community, and perhaps we’ll explore it during subsequent trips.

After eating at Grecian Corner, we met up with another one of my high school buddies residing in Seattle, JB. It had been a few years since I’d last seen him, but, in letting the good times roll, we resumed right where we’d left off at the time of our previous reunion. JB is a gifted music producer, and one of Seattle’s top up-and-coming bartender talents. He’s got a charismatic spirit, and I couldn’t think of anyone better than he and his lovely girlfriend Kendra to show us Seattle from the point-of-view of locals.

Among the places we hit for drinks and snacks was Canon in the Central District. It’s a classy bar with literally hundreds–there’s an extended I-Pad menu some thirty pages long–of liquor varieties. I took my first-ever shot of Fernet Branc and loved the minty, medicinal punch. The highlight, however, was the bone marrow. The buttery, beef tissue was delicious, but even better was the Bone Louge bonus. After digging out all that soothing goodness, the waitress brought me a shot of whiskey which I poured down the center of the hollowed bone, using it like a funnel to deliver all those delicious juices and tidbits into my mouth. With a napkin tucked under my chin, I felt like I was taking carnivorous communion in the Church of Divine Bovine! Simply amazing.

By Monday morning it was already time to go. As full as the trip had been, it felt like the fun was only getting started, but alas all good times come to an end. On the plane, at the moment of ascension, I, a chronically anxious flyer, felt the familiar tension in my gut. But the anxiety was short-lived as I felt a gentle hand–that of my beautiful lady–caress my own. Watching the earth fade below us, I reflected on all these blessings in abundance: Love, friendship, and joyous travels. The moments that shimmer.