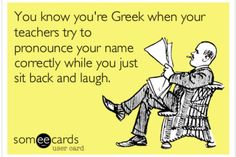 Ah, it’s that time of year again. Kids return to school, as do teachers and tutors. We have all been there, no matter whether we inhabit the role of instructor or student: early September, shuffling into a classroom different from the one we left behind back in June, greeting familiar faces and introducing ourselves to new friends. Those introductions can be awkward, especially if you have an “ethnic” name.

It wasn’t long ago when “Anglo-Saxon” seemed synonymous for “American,” the dominant culture suppressing all others to the point that surnames such as Cooper, Smith, and Williams were the safe and cuddly norm. A pity should you, or your distant relatives, have arrived on U.S. shores from a place where people are identified by syllabic denominations of far richer complexity: you were either forced to adopt a “colonized” version, or labeled as strange and “foreign.” “Abnormal” at the worse, “exotic” at best.

From our current context in this ultra politically correct contemporary world it may be difficult to imagine school children singled-out for their “un-American” names. But even I, born in the not-too-distant past of 1980, had a tough time come Autumn as fellow students chuckled when teachers struggled to pronounce “Papafrangou.” Ancient is the joke of the Greek-American kid slumping out of sight in his/her desk chair as Mister or Miss Johnson unintentionally slaughters his/her family identifier. This isn’t to say I didn’t, on some level, identify with the plight of my educators. I often tell people that I couldn’t even spell my last name until the beginning of second grade. Just too many damn letters to contend with! As I grew older I would reassure new teachers that the name wasn’t so difficult to pronounce if they took a deep breath and approached it one syllable at a time. Papa-fran-gou. They would inevitably smile in relief, thank me profusely for the clarification, and pronounce the name correctly from then on. Still, I believe hearing my last name garbled so many times left a certain impression on me.

When, as a teenager, my debut book of short stories Concrete Candy was published by Anchor Books I decided to use only my first name. This was partly because I didn’t want to deal with the mispronunciations of Papafrangou. This is not a new practice by any means, of course. Many writers, actors, politicians and professionals of various ethnicities decide to “Americanize” their names for a variety of reasons. As I grew older, however, I decided that never again would I take the easy way out. From then on I was going to proudly proclaim my last name, and everyone else would learn to pronounce it eventually. How’s that worked out, you may ask? Just fine. Great, in fact. Nowhere is this fact more evident than at my “day job” where I work with elementary students at an after-school program. When I first started tutoring children in a setting where they had to refer to their instructors by their last names, I inevitably contended with the wide-eyed reactions upon introducing myself.

“Mr. Papa-who?” would usually be their response. One kindergartener even looked at me with a pained expression and simply breathed, “That sounds kinda weird.” Another chirped, in her Disney-esque princess voice,“Mr. Papafrangou? Is that because you’re everybody in the world’s papa or something?”

But in the end, every single student I work with has learned, with minimal effort I might add, to say my name correctly. That makes me smile. I’m a proud Greek, and I treasure my family name. I hope you treasure yours, too.

Do you have an interesting or humorous anecdote involving your Greek last name? I hope you’ll share in the comments!