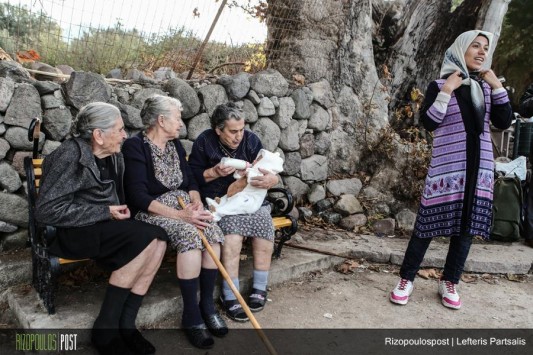 Circa 1984. As the story goes, my yiayia arrived to pick me up from pre-school one afternoon and I paused in my romping atop the play structure to reassure a young friend, in reference to the approach of my grandmother, that “she’s old, but she’s nice.” For years afterward, Yiayia told the tale with a chuckle. She passed in 2007 at the age of eighty-nine, so way back in 1984 she wasn’t so old at all. Of course, to a pre-schooler, “young” and “old” are relative concepts.

In America, we tend to cast away our elders, banish them to nursing homes and retirement communities because their minds often grow dull, and their limbs feeble. They become difficult to tend to, and so they are relegated to the care of those to whom they bear no relation; those professionals mostly well-intentioned despite the clinical aura of their gaze and touch. They literally grow to be someone else’s responsibility because these days, in our “modern” society, we are responsible for so much. This is not meant as an indictment of our culture, but rather an observation of how the elderly are simultaneously held in esteem and ignored; both snowy-crowned matriarchs and patriarchs of our families, and wrinkled burdens to be ridden of. When we pass an elderly person on the street, we are often struck with the ambivalent urges to regard them with a smile, and simply look away, pretend their fate is not also our own.

In Greek culture, attitudes are quite different. In the larger cities like Athens and Thessaloniki old people may be transferred to care facilities in due time, but for the most part the elderly live at home, with family, until their last days. My paternal yiayia, Sophia, spent her golden years surrounded by loved ones in the seaside home where she had raised her seven children, until she passed in 2006 at the age of ninety-one. I vividly recall those visits to Greece prior to her death, the evenings when she would sit in the garden, basking in the twilight amid fragrant citrus trees, as one-by-one her children and grandchildren–my uncles and cousins–would pay visit. She would tell stories and we would laugh, and when the visitors left after nightfall she still had the company of her daughter and her son-in-law–who occupied the home’s upper floor– and myself, of course.

My maternal yiayia, Catherine–the woman of “she’s old, but she’s nice” fame–died in the family home here in Oakland under the care of myself, my mother, and her partner. It was often a struggle, often an experience filled with despair, and there were many times when we questioned whether or not to put yiayia in a home. It seemed easiest to let someone else deal with the dementia that had amplified her ornery ways until it robbed her of personality altogether. But we stayed the course, witnessing the stages of death in all their starkness. If I learned anything, it is that in death our loved ones never really leave us. They remain in our memories, in our hearts. If I gained anything, it was a deepened respect for elders in all their wisdom; for there is much truth in the old cliche.

These days, at thirty-five, I hold my own ambivalence in regard to aging. Sometimes, silly as it is, I wince at the silver strands in my beard, the creeping crows feet edging my eyes. I’m not old, but I’m growing older and in this era of obsession with youth and finding a cure for aging, there is something refreshing about holding an acceptance of time’s continual passing.

During the coffee social hours that follow Sunday services at our local Greek Orthodox church, I often sit among elders and soak up the wisdom, the stories. Yesterday I spoke with a man named Kosta who, in Greek, relayed his tales of journeying from the Motherland some fifty years ago to work in the factories of Lowell, Massachusetts before settling in California. He also spoke of lean years in Greece, war and poverty, and what it means to leave one’s home country, trading familiarity for life as a perpetual outsider. His eyes shimmered, as did his words, and what an honor to bare witness.