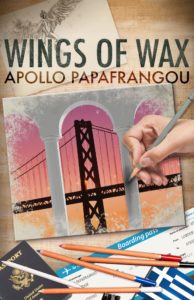 March Madness is nearly upon us, dear readers. No, I’m not referring to the NCAA basketball tournament, though I will try to find some time to watch a game or two while conducting a publicity tour around the publication of my debut novel, WINGS OF WAX. Work and leisure balance, right?

WINGS OF WAX is scheduled to hit retailers on Thursday, March 10th, two weeks prior to the release of MY BIG FAT GREEK WEDDING 2, the sequel to Nia Vardalos’ wildly successful 2002 film about the loveable Portokalos family. The movie’s opening date coincides with Greek Independence Day, March 25th, so next month is shaping up to have quite the Hellenic flair. In looking forward to March, I’m also compelled to reflect on the past, waaay back to 2009 when I was a second-year graduate student struggling to find my story in a Creative Writing MFA program.

In 2008, I began graduate school studies at Mills College in Oakland, CA. I spent the first semester feeling my way around campus, taking lit classes and reading novels. I was in a critique group, but didn’t do much writing, primarily due to the fact that I entered the Creative Writing program with what I thought was a completed novel: an urban Oakland tale of a young man coping with the loss of his murdered brother. Each week I submitted sections of this story for feedback. For the most part, my work earned positive response from fellow writers. I seemed destined to cruise through the next couple years in route to earning my degree. Not quite.

Despite the early praise of my novel draft, I didn’t feel tied to the story. In reading over the work, it seemed as though someone else had written it. The characters and circumstances didn’t interest me, though I didn’t want to admit that to myself. Besides, I figured that if my colleagues enjoyed the work, I must have been doing something right.

Fast forward to the second semester at Mills. The same writing excerpts which had previously earned praise were panned this time around. My new critique group’s professor, a well-accomplished novelist who shall remain unnamed, marred my workshop submissions with red pen—truly mightier than the sword—to the point that I began to think of the page as my flesh; the crimson streaks across it akin to fresh wounds.

Each week in class, this professor peered at me across the room, her raven eyes brimming a predatory ferocity below equally dark bangs. She and uttered things like, “You need to do a better job inhabiting your characters. Your people aren’t real yet. This story reads like a TV show.”

Unless someone is comparing your story to the likes of The Wire, Breaking Bad, or Mad Men for instance, no serious novelist wants to hear that their work is mere television without the pictures.

“You need to write from a place of authenticity,” my professor went on to say, “Write your story. The word is all that matters.”

As harsh as this professor could be, I began to realize, after shoving my ego out of the way, that she had the best of intentions. She was pushing me, like any good teacher or mentor, to do the work and get better. I know she didn’t mean I needed to literally write my story, but, in some sense, that’s what I began to do.

Heading into the final year of grad school, I gave much thought to the notion that despite the emphasis on the ancient Greeks’ contributions to world culture, there seems very little written in regard to modern Greek culture, and the experience of Greek-Americans in particular. Of course we do have the movie MY BIG FAT GREEK WEDDING, and Jeffrey Eugenides’ stellar novel MIDDLESEX, but what else? The more I considered this, the more compelled I felt to write from my own experience, not in the sense of writing an autobiographical story, but in respect to joining other Greek-American artists in illuminating our heritage.

I began WINGS OF WAX fall semester of 2009, though it wasn’t called WINGS OF WAX at that point. “Flight Paths” was an early title. The earliest draft of the story began with Angelo standing outside of an exotic bird shop, his dreaded place of employment, while pondering the world beyond his inner-turmoil. In fact, the novel’s early incarnations were almost entirely focused on the protagonist’s interiority; a kind of stream-of-consciousness depiction of a young man’s deepest insecurities and anxieties as he tries to forge a place for himself within the local Greek community.

I started the story with no outline, though I did have a vague idea as to how it would end. The writing came fast and easy. It was a fun project—the book I should have been writing all along; the novel I had finally given myself permission to produce. Above all else, that was the greatest thing I gained from the program. Even my old professor, the toughest of critics, saw potential. She told me to keep pushing, to continue forging deeper into the story’s truth. That seems to be the most valuable aspect of attending an MFA program: You allow yourself time to write and read, and in doing so you find your voice.

The next semester, my final at Mills College, the story finally began to take shape to most closely resemble the novel that it is today. At least in the sense that it’s no longer a stream-of-conscious narrative as Angelo’s struggles are reflected in how he interacts with the world around him and outside of his head. This makes for, apparently, a more compelling read.

As graduation neared, I submitted for approval my thesis, sixty pages of a new novel draft, a Greek-American narrative now titled WINGS OF WAX. In the months after earning my degree, I completed the draft. I then spent the next several years revising the book, listening to the valuable opinions of my peers, and sharpening the story’s structure. I submitted the novel to publishers and agents, racked up some rejections, and did some more revision work. I sent it out again, almost signed a deal or two, but they didn’t pan out. Finally, seven years after the story idea sprouted in my mind, WINGS OF WAX is on the brink of soaring into readers’ hands at last courtesy of Seattle’s Booktrope Publishing. I found my story, and a publisher, and had a lot of fun in the process. In reading the novel, you might find that it is your story, too. 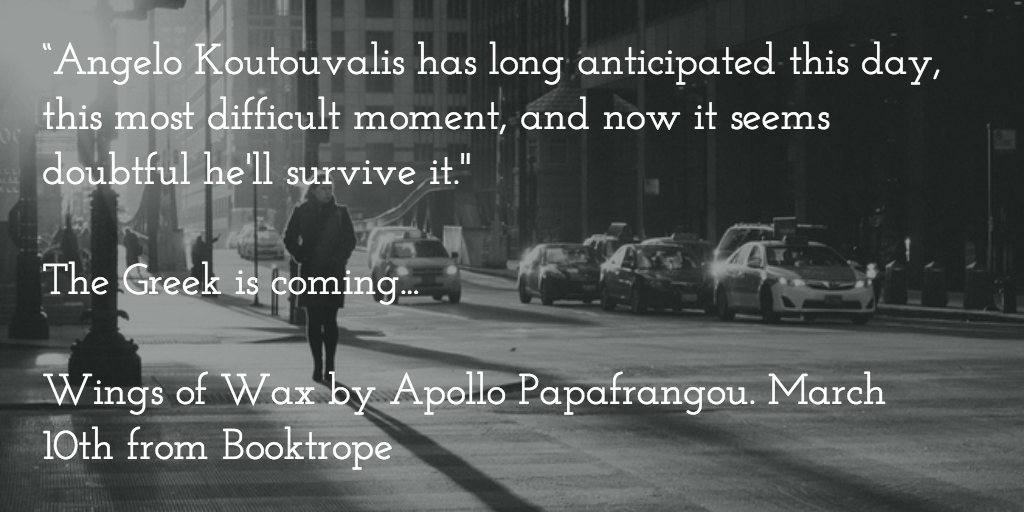