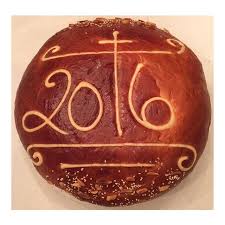 After two weeks of holiday celebration, work begins anew with the first blog post of 2016. In looking forward, into January and the months beyond while preparing for the March release of my novel Wings of Wax, I can’t help but also gaze back to past New Year’s Days.

In my memory we sit around my grandmother’s table, at the center of which is a simple round cake unadorned with frosting or candles. Still, the moment invites anticipation as my yiayia hovers over the modest loaf with a knife, her hand making the sign of the cross–straight down, then right to left–prior to conducting the first cut. Four of us are present–Mom, Dad, Yiayia, and I–though she divides the cake, the Vasilopita, into several slices. The first is for Jesus, the second for Mary, the third for St. Basil after whom the cake is named, the fourth is for the house, the fifth for the poor, and the rest goes to those of us at the table from youngest to oldest. We dig into, albeit carefully, our special dessert. Amid the wedge of cake on my fork, something shimmers in the light. Upon further inspection, I discover the lucky coin, wrapped in gold foil, and hoist it high for all to see. Another year of good fortune for me! As a child it took me a while to figure that Yiayia rigged the cake so that I always ended up with the prized slice, but no one else seemed to mind.

As my Greek readers will know, the cutting of the vasilopita cake is a tradition often occurring on New Years Day, though it can also be done later in the month. It’s similar to the Mardi Gras King Cake of New Orleans fame in which a tiny plastic baby is substituted for the gold coin. The vasilopita commemorates St. Basil who, according to legend, redistributed the gold and jewelry of Caesarean citizens who had ransomed their goods to prevent the raiding of their city by a foreign tyrant.

This year marks the ninth since my maternal grandmother’s passing. Due to her upholding of the vasilopita tradition, I hold a special place for her in my memory each New Year’s Day. This January 1st there was no vasilopita at home, though I suspect I’ll find myself at a party in the coming weeks in which the special cake will be cut. Maybe both my yiayias will look down to ensure that I have more good fortune this year.

In one way or another, we all make our own luck, whether literally, through baking it into pastry, or figuratively, in how we choose to approach and interpret the often random occurrences in our lives. May the new year be a lucky one for you! Here’s to 2016 bringing all the best things!