There’s still a There Here 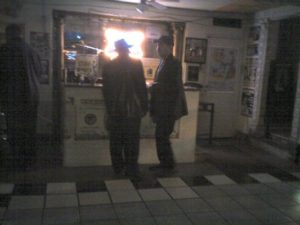 Yesterday was the first annual Oakland Book Festival downtown at Frank Ogawa Plaza. Amid green grass and the towering, Colonial Lego stack that is city hall, booths were set up for book sellers and authors to showcase their literary triumphs. The crowd was quintessentially Oakland: a mix of cultures and colors; revolutionaries and readers trading utterances of Bay Area slang on the tranquil breeze.

It’s a strange time to be from Oakland; inspiring if you’re a writer as there’s plenty of material to glean stories from. Our town is struggling to maintain its politically radical, blue-collar roots while adjusting to its current reputation as the “West Coast’s answer to Brooklyn” — another city transformed from grimy, a working class afterthought to a new mecca for yuppy upstarts.

Due to its abundance of street corner philosophers, artists, and academics, the Book Festival dubbed Oakland the “Athens of the Pacific,” a new slogan I can certainly champion. But “The Town,” despite its colorful history, was once a place no one traveled to unless necessity demanded, and now it’s a trendy destination. One tends not to appreciate the vaguely punk-rock aesthetics of a classic abandoned building — boarded windows, painted-peeled facade and all — until they’ve been glossed over to make way for yet another chic coffee shop.

Gentrification is not, by itself, a dirty word. All cities endure change; the transformations brought on by this natural phenomena have their positives and negatives. New citizens bring new businesses and boost local economies, but often at the expense of locals who can’t afford the hightened cost of living.
While at the Book Festival, I listened to a local Chicano writer named Ruben Llamas as he waxed nostalgic about growing up in West Oakland during the 1930s and 40s. Due to its abundance of top-notch blues clubs and thriving African-American community, the area around West Oakland’s seventh street was once dubbed “Harlem of the West.” As reflected in Llamas’ memoir, Eye from the Edge, the west side of town was also an ethnic melting pot, home to Latino, Japanese, Chinese, Irish, Portuguese, Italian, and Greek immigrants peacefully coexisting.

Llamas’ story, and the Book Festival overall, reminded me of a particular experience that epitomizes my view of this city. One Saturday night I found myself at Lakeside Lounge, a funky little dive that generally caters to sixty-something African-American clientele. There was an awesome funk band playing, and good vibes all around.

Toward the end of the night, a rather dapper gentleman asked me, off the cuff, if I eat lamb. (I know I look Greek, but wow!) Not sure I’d heard correctly, I asked him to repeat the question. He then showed me a picture on his phone of a lamb roasting on a spit.

I replied “Yes, I do eat lamb. Actually, I’m Greek, and roasts like that are a big part of our Easter tradition.”

Then the guy goes “Yeah, I prepared this one for a Greek family’s baptism celebration. At the party there were Greeks, Lebanese folks, Middle-easterners. And last weekend was the Greek festival.”

We talked another minute or two, then I complimented him on his threads, shook his hand, and bid him good evening. To think, out of all the people in that bar, I was the one to whom that gentleman showed the picture!

Oakland is truly a city where ethnic communities blend, and I hope that while in transition, we don’t lose this multicultural singularity.