This Feeling: On love, romance, and Greek Myth 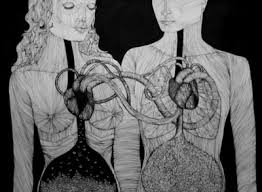 In Greek Mythology, early humans were sustained by the beat of dual hearts.

In his Symposium, Plato declares that according to Greek Mythology humans originally boasted four arms and four legs, their bodies driven by the beat of two hearts. Zeus was afraid of being overthrown by humans, and so he split them down the middle, leaving them to spend a life time searching for their other halves.

Some of us find our counterparts with ease. Others struggle and, maybe, never succeed. Surely I’m not alone in admitting that they were times, mostly in my early twenties, when I felt destined to wallow among the latter group. Substantial romantic companionship seemed a thing meant for others, but not for me. Try as I did to seek meaningful connection, true partnership remained beyond reach. I felt, on some level, that I was doomed like my namesake: that most handsome of Olympians chasing a certain young nymph who prayed to alter her form lest she be caught by the sun god–good looks and all; preferring to live out her days as a laurel tree.

Fast forward to my mid-thirties. Things are quite different now. I’ve been thinking about love a lot lately. Fitting, I suppose, since it has been a popular topic over the last few days with the supreme court’s historic ruling. We’re all free–legally permitted, even–to love who we want. It may no longer be Spring, but love is in the air. It’s airborne, in other words; a feeling one can catch. So go ahead and–as the youngins say these days–catch feelings. I certainly have.

Whatever I’m feeling, it’s a sensation like nothing I’ve quite experienced before. I’ve never been filled up in such a way–awash with an abundance of affection to share; so much to give and such an all-encompassing desire to do so.

In short, I hold a deep desire to give to this woman who has come into my life–not giving in the sense of material things, but giving as in my whole attention, all my affection, everything that’s good within me. It’s the least I can do for her; she who has provided the power to slow time until moments shimmer with a certain permanence. This love is a desire to act selflessly, to put this person–in all her grace–first. Not put her on pedestal, by any means. Just make her that top priority.

Together we can rise as–to quote a line from a certain poem of mine–“the sun’s ascent, higher and higher each day. May you and your loved ones ascend as well.