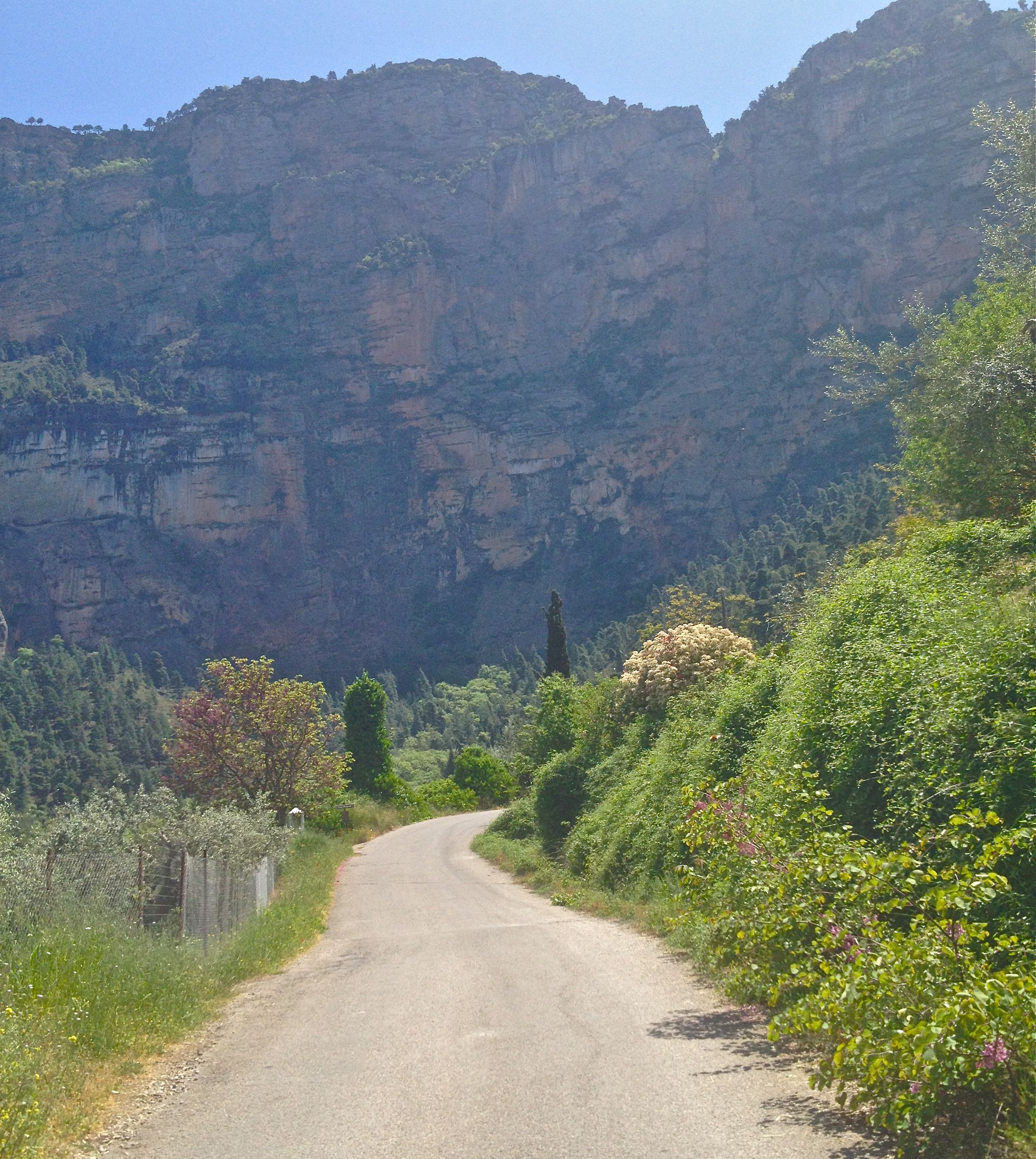 Last week’s blog on kindness and hospitality in the Greek culture–from the time of Homer, in which Odysseus often relied on the generosity of strangers to find his way home, to modern day Greece where natives welcome both tourists and refugees with the same open-heartedness–got me thinking about a particular adventure I had with my father some years ago. Amid the busy agenda that often accompanies visits to Greece–fun in the sand and surf, savoring huge meals in the company of relatives, and so on–Dad and I were given the task of tracking down the cousin of a close friend back in America. We understood he lived in a mountainous village small enough to not warrant mention on a map, though we knew the general vicinity of the town. So, with the same wanderlust that inspired our ancient ancestors, we took to our chariot in the form of a red Citroen, and headed for the hills. Up winding roads lined with the silvery leaves of olive trees we rolled, passing the occasional sheep herder–beard white as the fleece of his flock–stopping to wave as he guided the herd up the cliffside. Onward we traveled, slowing when we went by the occasional village, often consisting of nothing more than a few crumbling houses set back from the path. At last, we located our destination. I can’t remember the name of the town, but I know it was inhabited by many people with the surname “Kokoris,” that of our Greek-American buddy back in Oakland. We found his cousin, Yiannis, and quite a day ensued, the particulars of which inspired this recent piece of flash fiction included below. Yiannis fed us, told us of his life in the village, even offered us his bed. We had never met this man, but because we were friends with his cousin–a relative he had never known, though he’d kept up with his news through the years–we were treated like family.

Yiannis lives a simple existence in his village, one shunned my many Greeks through the years as families in rural areas have historically fled to the cities in search of better lives. Now, however, in the midst of economic difficulties, many people are returning to family homes in the village in order to live off the land, and in turn they’re finding happiness and success.

We eventually had to leave Yiannis that day, but by the time we said goodbye, it felt as though we were bidding farewell to a relative of our own. Yiannis, our most hospitable host, waved us along from his modest front porch, though it was plain to see he would have liked for us to stay.

Better to show you, rather than tell you, the details of that day, included below in slightly fabricated form:

While driving the mountain road, I twice passed the sparse village; merely a cluster of terra-cotta roofed cottages among the silvery-green olive trees. Further investigation revealed a stone chapel and a single kafenio inhabited by three old men drumming their stubby fingers on their tabletop between sips of coffee.

Just down the path, a woman in a black headscarf greeted me with a toothless smile and pointed the way toward the right house. The man who answered the door after a trio of knocks sported a wild silver mustache and hands thick and knobby as weathered tree limbs.

In Greek, I explained that I was the friends with Sophocles, not the ancient playwright, but the homeowner’s cousin back in America. With eyes wide in apparent elation, the man named Yiorgos Kokoris invited me inside and insisted I take a seat at the table covered with a lace doily. In the center stood a ceramic vase shaped like a fish. From the fish’s mouth yawned a bouquet of orange wild flowers. To the right of the table, on the wall, a large screen TV showed an afternoon soap opera.

I sipped from the glass of Amita Motion Yiorgos had placed before me, then glanced into the adjacent room equipped with a modest bed, beside which hung painted icons of Jesus and Mary.

“My cousin in America sent you to find me?” the old man asked.

“My cousin Sopho! I’ve heard stories over the years. He is a rich man?”

I hesitated, unsure how to answer. In American standards, Sophocles was moderately wealthy, certainly a tycoon compared to mountain village life. “He invested in real estate through the years and is doing okay.”

Yiorgos stroked the wire brush strands of his whiskers. “He has a heart condition, yes?”

I nodded. “It prevents him from flying, though he wishes he could meet you in person. He’s getting older and wants to know of his last living relative here in Greece.”

Yiorgos contemplated the television for a moment, then said, “It is certainly lonely in the village. The young people realize the soil is too riddled with stone, too parched to nourish their roots, and so they plant themselves in fertile city ground. Still, amid the crisis, many have returned to reap what they may from ancestral lands. I had a wife once, but she died in child birth, unable to bare our first child, a son. Neither did the baby survive.

I was the youngest of nine children. No one else is living. My brother, the second youngest, he died only two years ago from a accident in the brain. One minute he was healthy and walking around, the next he dropped to the Earth never to rise again.”

“Did you ever think of leaving the village?”

“I did, as a young man. Drove a taxi in Athens for a few years, but the traffic, the smog, the people, steered me right back up the mountain. It’s okay. I have my lambs, my sheep. My books. My television.” Yiorgos contemplated the table cloth. I shifted in my seat. Then, the man asked, “Would you like a drink?”

I rarely drank during the afternoons, at least not back in the States, but figured the man deserved a drinking partner. Yiorgos filled two small glasses with tsipouro, handed one to me, clinked his own against it, then sipped the fiery liquor. I drank too, the buzz coming on fast as a stampede of cliff goats. I nursed the rest of my drink, but Yiorgos finished his and went for two more. When the man’s eyes glazed over, I figured it was time to get on the road again.

“Won’t you stay the night,” pleaded Yiorgos. “I have plenty food.” He opened an industrial freezer to reveal lamb carcasses splayed one atop the other. He shut the door after I gave a polite smile and nod, then he led me to a dim cellar heavy with pungent tang of home-made cheese. In one corner, a small metal frame bed with cotton sheets.

“Thank you, but I have to get back to my own family.”

Yiorgos nodded, and bid me farewell, but not before loading me up with spoon sweets, olive oil, and dried figs.

I hugged the man, promised to send photos of Sophocles and I, then got in my rental and drove off. When I glanced in the rearview, Yiorgos stood waving from his tiny porch.