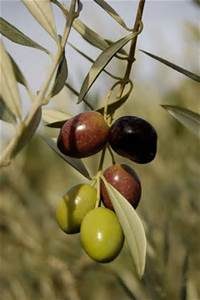 He’s done something to make me mad–exactly what I don’t recall, though the affront occurred only moments ago, so caught up in my anger that details quickly lose importance. All that matters is that I’m angry now, mad enough to stomp my little foot, clench my tiny fists, curl my lip back in a snarl. I march over to my dad, gaze up at him and fire away with the greatest insult my pre-schooler’s mind can conjure: “Why you… you… Greek olive!”

Bam! There it is. The ultimate slanderous remark spewed forth with all the force a four-year-old can muster. Maybe I figure that with Dad’s dark hair, his sun-kissed complexion that I’ve heard referred to as “olive-tone,” I associate him with–even if only subconsciously–those small, briny fruits. He’s an olive alright–something strange, something foreign, something that while common among our family dinner table seems absent in the cuisine of my non-Greek friends. And I figure that’s the ultimate blow that will surely do him in. So imagine my confusion when he starts to laugh… and Mom laughs with him. They are a strange breed.

A few weeks ago I was contacted by a website called The Two Generation that features stories from people who have grown up in America as children of immigrants. They wanted me to speak, and eventually contribute an essay, about my experience as a Greek-American, son to an immigrant father. I gladly obliged, though I didn’t know where to begin. Among the memories flashing through my mind was the one I just described.

From an early age I knew Dad was different, as out of place as an olive tree amid an apple orchard (what’s more American than apples, right?) Sure, my mother is Greek as well, though she’s Greek-American like me, born to immigrant parents. Dad, however, was something else entirely. He spoke with an accent. I laughed when he said “sour” in place of “shower,” heaved a sigh when he insisted we converse in his mother tongue. Sure, he was my dad, but that didn’t mean I didn’t think he was strange.

My American friends had fathers who talked of childhoods spent playing baseball, hanging out in soda shops with friends after school, cruising muscle cars. My dad’s stories were flavored with many sea tales, and soccer instead of baseball. Sure, he hung out with friends but he also stopped going to school at one point to work construction alongside his older brothers. By sixteen he was living with a friend in Athens, some three hours from Ermioni, the Peloponnesian town where he’d grown up, and by twenty-four he was heading to America to his partner and newborn son.

My father, the youngest of six children, was the only one of his siblings to leave Greece. He came to the States knowing but a few words in English, and before long he’d earned his contractor’s license and started a business, patriotically, and appropriately, called Zeus Electric. Though he did well for himself, working to support a family and help raise a child, he never seemed to truly feel at home in America. Growing up in Greece, he’d had a certain affinity for American music and styles, often keeping company with U.S. tourists and hanging out in a circle of friends that included my mother’s Greek-American relatives. Surely it was something of a dream to finally come to the States, so I as a kid I never quite understood why he’d be overcome by a slump-shouldered sadness, his face holding a distant longing, whenever we ventured near the ocean–be it the Monterey Bay, Sausalito, or even the Oakland waterfront. “Ahh, Ellatha,” he ‘d say to himself. I’d just giggle at an another odd remark.

As a toddler I made my first trip to Greece, met my uncles and aunts, my plethora of first cousins, played in the ocean, scored ice cream from my yiayia. Throughout the majority of my childhood we visited at least every other summer. But of course the country wasn’t a part of me in the same way it was a part of my father. That’s to say that in returning to America at the end of each trip, I didn’t leave a part of myself behind, a piece of my being without which functioning in the States grew all the more difficult.

Dad and I clashed in later years. It was inevitable. He might as well have been from outer space while I was firmly entrenched on Earth. Growing into adulthood, and visiting my father’s homeland from a new vantage point, I finally understood that much of what irked me as a teenager was simply a result of our different experiences growing up. Sure, I’m Greek (or of Greek descent), but obviously not in the same way my father is. Sounds simple but it took me a long time to figure that out.

These days, I enjoy hearing my father’s stories of growing up in Greece, just as I relish his tales of arriving as an immigrant in a vastly different land, struggling to find work, struggling to build community even as he quickly got introduced to the local Greek enclave. I can’t imagine how difficult it must have been to leave your native land and start anew.

Those of us who, regardless of ethnicity, are first or second generation Americans grow up in the hyphen between two cultures, two identities. The stories our parents tell of friends and family they left behind, and experiences they gained, strengthen that link to our ancestral home.

In a sense, Dad is still a Greek olive, though I no longer use the remark disparagingly. Now, I can see the entire tree to which he belongs; those roots running deep… the roots that are my own.